Change terminal colors to visually know whether the prompt is local or remote.

I tend to have (lots of) terminals open in my desktop, and sometimes I do not know whether the terminal is inside a remote server (meaning I have SSH-ed into), or it’s just my local machine. Furthermore, I would like to differentiate between

Consider the terminal below. How do I know whether top is listing the local processes or my remote processes? I can, of course, look at the window title which normally gives some clues about which computer I am logged into (no ubuntu in this case). But it requires a level of attention that I usually don’t have. I have deleted the wrong files, or killed the wrong process because of this. 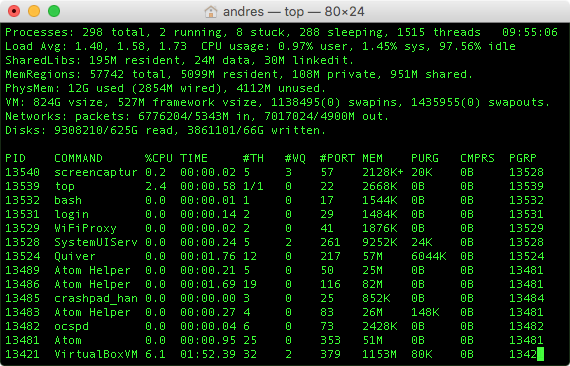 My solution: whenever I log into a server, change the color (theme really) of the terminal. How do we do this? See below.

Note that the last two lines of the script will only run once I have logged out of the remote machine. On ocassion I have had weird broken connections that break this scheme, but for the most part it works very well.

Since I do not want to learn a new command I alias the ssh command to color.sh via:

Stick it into your .profile and you are set. Next time you open a terminal and ssh somewhere the terminal will turn from the default theme (“Homebrew” in my case) to the remote theme (“Ocean” in my case).